There are probably more stories about the history of the Venture Inn at 255 S Camac St. than about any other gay bar in Philadelphia. The stories run like this: “It was the stable of the house owned by the Barrymores,” “It was part of the Underground Railroad,”   “It was already a popular eating and drinking spot by the time of the 1876 Centennial.”

For some reason, the two block length of Camac Street running from Walnut to Spruce was developed by about 1800, much earlier than the surrounding blocks. About 1813, the street appears in directories as Hazel Alley, then a bit later as Dean’s Alley and by the end of that decade as Dean Street. It would remain Dean Street for most of the 19th century, until about 1898, when the hodge podge of street names  in Philadelphia were regularized. It was then renamed Camac, because it was in a line with Camac Street which ran above Master Street in North Philadelphia. I cut down Camac St. whenever I’m walking in the area. It’s a lovely street; most of the row of houses on the north side of Camac between Locust and Spruce Streets date from the early 1820s. The Venture Inn, at 255 S Camac, was originally the stable to 217 Spruce Street and was built a bit later, in the 1830s. In the picture, left, from 1900, the Renaissance-inspired circular relief of the infant on the northern wall that we still see today is visible. It’s copied from decorations on the 1419 Ospedale degli Innocenti orphanage in Florence. I’d love to know why it’s there and when it was put on.

Let’s start with the Barrymore legend. The story seems date back to an article that appeared in the 1937 WPA Guide to Philadelphia. The Guide stated that John Barrymore’s grandparents, Louisa and John Drew, lived at 255 S Camac St. in the 1850s. There are problems with that. Not only was 255 definitely still a stable then, but city directories list the Drews as living further north, on Buttonwood Street, in that period. Perhaps the story had something to do with the nearby Barrymore Apartments at 238 Camac Street, which were built around the time the Guide was written. No Barrymores ever lived there, either. 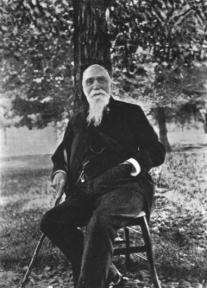 In the 1850s and early 1860s, when the Underground Railroad was most active, 1217 Spruce Street and the stable behind were owned by the Harrison family, who were well-to-do manufacturers of chemicals and the white lead used in paint, above. The grandfather Thomas Harrison, was indeed a Quaker and a member of the abolitionist society in Philadelphia. The photo, left, is of his grandson Thomas, who was living at 1217 Spruce St. in the late 1850s. Was he or the family involved with hiding fugitive slaves? Possibly; but there are several things to consider. First, although all Quakers were abolitionists, only a small minority of Quaker families were ever involved in the Underground Railroad. Second, despite the use of the term “underground,” the network usually did not involve actual tunnels like those that exist on Camac Street. There are many tunnels scattered throughout Center City. The fact is that most of them were used to hide illegal Prohibition hooch and not fugitive slaves. Lastly, by the 1850s, the Harrisons were two generations removed from their abolitionist grandfather. All of that being said, if there is a link between the Venture Inn building and the Underground Railroad network, the most likely one would be through the Harrison family. 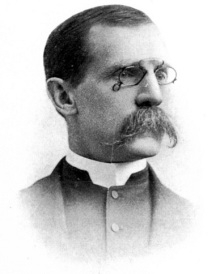 From 1889 to 1902, 1217 Spruce Street was the home of Civil War veteran Reverend Leverett Bradley. The Rev. Bradley, right, was the rector of St. Luke’s Church a block away on 13th St. In 1898, under his rectorship, the parish of St. Luke combined with the congregation of the Church of the Epiphany on Chestnut and 15th Streets to become the gay-friendly Church of St. Luke and the Epiphany that we know today.

After the ill Rev. Bradley moved out in 1902, the former Spruce St. rectory became home to Dr. Ernest Kelsey and his two daughters who entertained there regularly, giving afternoon teas and luncheons to other families listed in Philadelphia society’s “Blue Book.” In 1908, Kelsey had work done on the back stable, putting in a new door and windows to make the space more usable. It also gets its own address: 255 S Camac St. From here on the story of the house and the stable diverge.

By 1911, Inquirer employment ads appear that read “Laundresses, housemaids waiters and cooks wanted. Miss Platz at the German Scandinavian Office at 255 S Camac, between 12th and 13th.” Miss Platz ran her employment service “for white Protestants ” there until the fall of 1916.

In 1919, entrepreneur Blanche L. James opened 255 S Camac St. as the Venture Tea Room. This is the first time that the building houses any kind of restaurant. The postcard, below, from the Free Library’s collection,  shows the interior of the Venture Tea Room and Art Shop in the early 1920s.

It’s possible that the post card ended up in the Free Library collection because the Special Libraries Council of Philadelphia regularly dined there before their meetings. Tea rooms in the 1920s were places run by independent, short skirt wearing “new” women who could show off both their self-reliance and their Bohemian flair, selling handcrafted bric-a-brac, antiques and curiosities along with tea and dainty cucumber luncheon sandwiches. From 1925 on, Blanche partnered with Corinne Meyers and Rose Kessler, running the Venture Bookshop, Gardens and Tea Room a block north at 201 S Camac, (the building that later became the Camac Baths.) A 1928 tourist guide book called it “A Droll Little Building in White.” 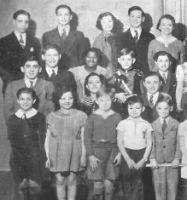 In 1931, now owned by George and Helen Cappo, the restaurant was first advertised as the Venture Inn. After World War II it is run by Dick Nolan and, like so many other small restaurants and bars in the Washington West area, it was a “musical bar,” serving up food, drinks and live entertainment. The featured pianist there through the 1940s was Temple graduate Charles Swier,  left, top row, second from the right, who sang with a vocal trio called “The Three Dandies,” wrote several musical comedies with Beaumont Breustle and had a show on KYW radio with vocalist Patti Marsh.

During the 1950s and ’60s, the Venture Inn became a Center City hangout for college age kids, see photo below, right from 1951. Interviews I’ve conducted with older gay men from the William Way Center’s “Silver Foxes” confirm that fact. In 1962, a Philadelphia Magazine article about Philadelphia’s gay subculture called “The Furtive Fraternity,”  listed the Venture Inn among the bars in the city which were places that homosexuals frequented. This was the first mention I’ve found of the Venture Inn as having any gay clientele.

THE INN COMES OUT

In 1973 the Venture Inn went from being a “gay friendly” bar to being a gay bar, when it was bought by Hans Lang, who had previously owned The Midway on 12th Street, which is iCandy today. See an early ad for the Venture Inn, above. Since 1973, the Venture Inn has been well known both as a gay bar and a restaurant.

In May of 1977, the business came under the ownership of Ted Wasserman, photo left, Ted’s in the center. Ted would operate the Inn for the next 30 years. By 2000 both the building and the clientele were beginning to show their age and the Venture got a reputation as attracting an “older crowd.” In 2004, rumors floated around that Ted was looking to sell. The business didn’t change hands until 2007, when Bob Berkowitz, the present owner, took over. Bob brought in a new kitchen staff and got the place and the business back on its feet – in 2008, the Venture Inn won the Philadelphia Rainbow Award for best Bar/Pub. 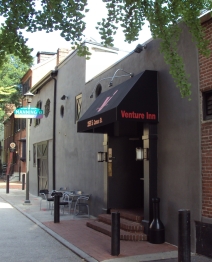 The stucco façade of the Venture Inn has just been totally refurbished and painted a medium gray with a new navy blue awning over the door. It really looks great; it’s worth a walk down charming Camac Street just to see.

So, what’s the truth?

The Venture Inn does have a long and unique history; not a Barrymore in sight, but, yes,  possibly an Underground Railroad connection. In any case, I doubt that any other U.S. city can boast a gay bar that’s tucked a way on a 200 year old side street and is housed in a building that had been a stable to Quaker abolitionists and a Prohibition era tea room.

• You can see the fifteenth century Andrea della Robbia terracotta tondi on the loggia of the Ospedale degli Innocenti here.