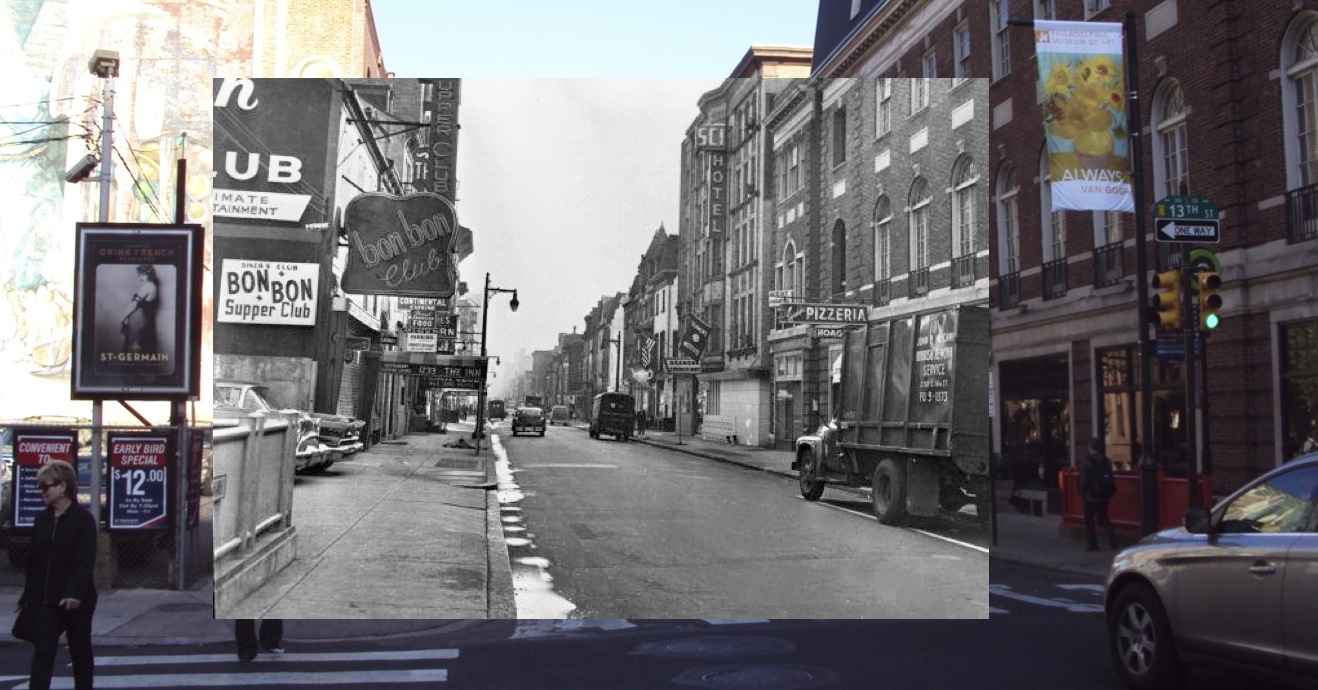 Odd Fellows in the Gayborhood

Oddfellows lodges began as fraternal organizations and “friendly societies” in England in the 18th century. Here in America, most lodges were part of the Independent Order of Odd Fellows, which had split off from the original order in 1813.  In 1843, the African American Philomathean Institute in New York petitioned the IOOF to form their own lodge.  Because of their color, they were treated with contempt and their charter was refused. 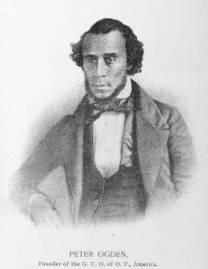 A Jamaican born sailor, Peter Ogden, left, heard of the Institute’s efforts and offered to apply for a charter for them through his own lodge in Liverpool, England, which was part of the Grand United Order of Odd Fellows. The Victoria Lodge in Liverpool didn’t hesitate to grant Ogden a charter. In 1844, the Philomathean became the first GUOOF lodge in America. A few weeks later, Unity Lodge No. 711 in Philadelphia became the first African American Odd Fellows lodge in Pennsylvania. Instrumental in the founding of the Unity Lodge was John C. Bowers, right.

Bowers was a Philadelphia abolitionist and civil rights activist whose story has largely been overlooked. He served as organist at St. Thomas African Episcopal Church, ran a clothing store at 71 S 2nd Street and was the secretary for the weekly newspaper, The Colored American. In 1862, he spoke out publicly against Lincoln’s plan to remove some five thousand black Americans to Haiti. The Philadelphia Inquirer wrote of him, “[John C. Bowers] was an active and enterprising citizen, warmly interested in all plans for the advancement of his people, [and] prominent in his hostility to slavery.” Since its beginnings, Philadelphia has always produced a wealth of strong black leaders.

By 1900, the GUOOF had grown to be the largest black fraternal organization in the country. Now headquartered in Philadelphia, it owned two buildings and had 19 lodges with over 1,000 members in the city. The Philadelphia organization even published its own newspaper, The Odd Fellows Journal. In 1905, the Grand United Order, operating from cramped offices at 602 Spruce St., hired architects Frank Watson and Samuel Huckel Jr. to design a new headquarters for them on the northwest corner of Spruce and 12th Streets. The slim five story Beaux Arts style office building they built neatly filled the narrow 120 foot long, 20 foot wide corner lot. The GUOOF would use that location as their headquarters for the next hundred years, renting out office space in the top four floors to other organizations and leasing the first floor to retail and commercial businesses.

By the middle of the 1970s, the surrounding area was changing. What had been a marginalized section of Center City with a few seedy bars was becoming a real neighborhood with gay owned bookstores, health clubs and cafes. In 1975, restaurateur Jack Friel and his lover John Winfield opened the Hasty Tasty deli in the Odd Fellows building, above.  Friel was a prodigiously active entrepreneur in the expanding Gayborhood. At various times he owned Seasons on Drury St., Bramwell’s on Camac St., managed the Back Street Baths on Chancellor and worked with the Metropolitan Community Church. Jack , John and Dickie Lance, pictured below, ran the popular Hasty Tasty from 1976 until 1980. 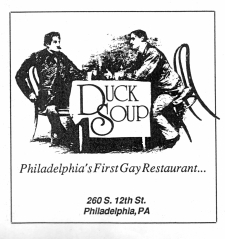 Jack sold the business to Larry Wenograd and Bob McCarthy, who ran it for two years as Windows on 12th, inspired by Windows on the World at the top of the north tower of the World Trade Center in New York. It then became the Land of Pizza for two years.

On June 1, 1984, Gayborhood icon Franny Price opened Spruce Street Video, left, on the floor above, advertising it as the first gay video store in the country. The street level restaurant then became Duck Soup, see ad above, from 1987 to 1995. The space would see its last incarnation as a late night gay hangout when Cheap Art, below, opened there in 1995. 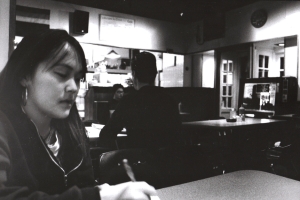 INTO THE TWENTY-FIRST CENTURY

Cheap Art closed in the early 2000s and Spruce Street Video moved a few doors down to 252 S 12th St. The short lived HX Philadelphia magazine rented office space in the building from 2006 to 2007. In 2008, the Odd Fellows relocated their headquarters to Virginia. That marked a low point. For a few years, the building was boarded up and took on a forlorn, abandoned look, below.

The GUOOF sold the building to APM Realty in 2009 and things began to look up. Permits and variances took time to get. The Spruce Street finally opened on February 5, 2012 as The Odd Fellows Cafe, run by Betty and Faith Ortiz, who also owned Spruce Street Espresso a block to the east. Odd Fellows Cafe only lasted 7 months, re-opening as YOLO in October of that same year. YOLO had an even shorter life, closing less than two months later.

On January 31st of this year, Toast, below, opened in the space. Today, the building is clean and neat and the façade is restored to its original Beaux Arts elegance. Toast, and its neighbor Shanti Yoga Shala, operate on the street level. The upper floors of the former African American lodge building hold eight two-bedroom residences.

4 Comments to “Odd Fellows in the Gayborhood”