T-Squares and Bootblacks: The Bike Stop

The history of the Bike Stop at 204-6 S. Quince St. follows a pattern that’s common to many Gayborhood businesses. What began as a private building would become a public space with live entertainment after World War II, and then a self-identified gay bar in the 1960s. The Bike Stop is special to me, because it’s the first gay bar I went into in Philadelphia when I moved here in 1998.

A THING OF DELIGHTFUL ODDITY

During the nineteenth century, that golden age of fraternal organizations, Philadelphia was home to its share of clubs catering to every profession and interest imaginable; painting, sculpture, advertising, theatre, journalism, literature, science and engineering. Many of these little clubs found comfortable spaces in the tiny alleys and side streets that honeycomb today’s Gayborhood. 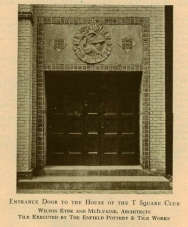 In 1883, thirteen Philadelphia architects formed the T-Square Club for mutual fellowship and to sponsor competitions and exhibitions.  Among the early members of this prestigious organization was Julian Abele, the first African-American graduate of the University of Pennsylvania’s Department of Architecture. For a few years, from about 1906 until 1914, the club was based at an architectural firm’s offices at 1204 Chancellor Street, just behind where Cafe 12 is today. In 1914, they bought a three story house and adjacent two story barn at 204-206 S. Quince St.  On that site, the firm of Wilson Eyre & McIlvaine designed the arts and crafts, rustic style, three storey building that houses the Bike Stop today (see photo of original entrance above, left, 1916). In 1922, the Evening Public Ledger described the buidling as “a thing of delightful oddity.” Two doors down, at 206, lived Wiliam J. Beattie, one of the city’s last horseshoers. Across the street, at 211, lived eccentric antiquarian, Dr. Eugene Pettit upstairs, with the romantically named “Blue Lantern” tea room on the first floor. The architects remained on Quince St. until the late 1930s, when, like many organizations, they dissolved their club in the face of the Great Depression and the oncoming war.

Below is the original terra-cotta medallion visible in the photo of the original entrance above. It was saved during renovations and is now at the Athenaeum on Washington Square:

I was recently able to find two photos of the second floor of the T-Square Club from their 1923 Yearbook. Here they are, below: 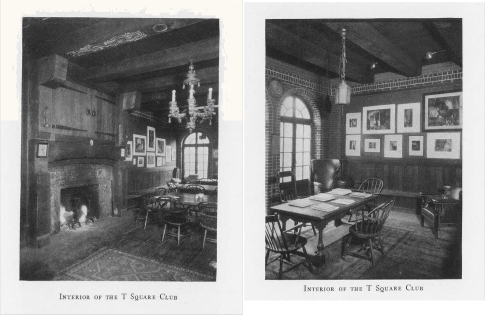 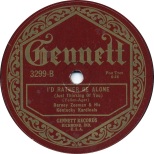 In 1927, the Shubert Organization built the beautiful Forrest Theatre on the south east corner of Walnut and  Quince Streets. The theatre helped give rise to small cafes and restaurants nearby which catered to its audiences before and after shows. In the 1920s the Blue Lantern Tearoom flourished at 211 Quince St. (more about that building’s LGBT history another time). In the late 1930s, after the architects left, the second floor of 204 S Quince St. was home to a little theatre group called the Quince Street Players. Some time about 1941, 204-26 Quince became the Forrest Restaurant and Bar, owned by Barney Zeeman. He bought the property in 1944. Barney had been a pianist and dance band leader in the 1920s and 1930s, performing all over the southeast Pennsylvania area and Atlantic City with his band, the Kentucky Kardinals. He died in 1976.

The ad, above right, and the photo postcard, below, of the Forrest’s “English Room” date from about 1948. You can plainly see the arched windows in the photo; it’s absolutely recognizable as the second floor of today’s Bike Stop.

By the early 1960s, the Forrest definitely identified itself as a gay bar, advertising in gay publications and appearing in gay travel guides. Here’s a photo of Quince St. from 1962, with a huge neon “Forrest Bar & Restaurant” sign on the façade and vinyl siding gracing the entrance. Visible on the north door, beyond, is a tiny “U.S.A. & A.” sign. This was the entance to the upstairs, third floor, private after hours club. The initials stood for “Uniform Social and Athletic Association.”

Next to that, beyond the  U.S.A. & A. sign, is the long sign for Dave Shore’s Jewish-style restaurant, which operated at 202 from 1941 until 1981. These strangely named social clubs, named after fictitious poitical or professional clubs, provided important private spaces, where gay men and lesbians could socialize and enjoy a little same sex dancing, which was strictly forbidden in public bars. Even though they were technically “private membership,” these clubs were frequently raided by the Philadelphia Police. There are many stories of raids on the U.S.A. & A. in the ’60s.

The black and white ad for the Forrest, below, is from a 1964 edition of Clark Polak’s gay publication “Drum,” published by the Janus Society here in Philadelphia. It’s a rare look at the inside of a gay bar in the ’60s. The two men discreetly have their faces hidden from the camera, but note the same black and white checked floor in the ad as is seen in the 1948 postcard above. It’s the second floor looking in the other direction.

By the ‘70s, as we see in this photo, right,  from 1972, the Forrest was billing itself as the “Forrest Theatrical Cocktail Lounge,” and we all know what “theatrical” meant.  The tree seems to have been planted somewhere between 1962 and 1972. It’s still there today. The Forrest featured drag shows in the ’70s, and the U.S.A. & A. had become the P.B.L., still an after hours private club, catering mostly to women.

In the late 1970s and early 1980s the Forrest went through a few rapid incarnations, as Scarlet’s Lounge from 1976 to 1977, as After Dark (after the discreetly gay ’70s publication of the same name) from 1977 to 1980 and finally as The New Forrest Lounge from 1980 to 1982. As the ad, right, for The New Forrest Lounge and “The Fabulous Fakes” shows, the bar was still “theatrical” and still very much gender-bending; it billed itself as “Philadelphia’s only showbar of its kind!!” This ad, right is from Center City Magazine, a gay entertainment and events magazine published in Philadelphia for a few years in the early ’80s. Below is performer Les Harrison as “Philly’s own Shirley Bassey,” in a New Forrest review.

In the early 80s, Philadelphia boasted two leather and denim bars west of Broad St. and two east of Broad St.  There was the 247 at 247 S 17th St., which had opened in 1971, and the Post, at 1705 Chancellor St., which had opened in 1976. There was the Loft at 1215 Walnut St. which opened in 1980 and the Cell Block above the DCA on St. James St. All were doing fine business. In 1982, Philadelphians M.C. member Ron Lord bought the Forrest and turned it from a show bar into a leather bar, hanging the infamous motorcycle on the first floor and christening the space as the Bike Stop on June 11th of that year. In 1983, the Pit Stop in the basement opened on weekends. Ron and the Bike Stop were early leaders in Philadelphia in raising money to fight AIDS. The top two floors remained a separate, private lesbian club called Mamzelle’s, run by Sally Tyre from 1982 to 1986. Mamzelle’s had two levels, a mirrored and strobed dance floor above and a conversation lounge and video games under that. Below is a great photo of Mamzelle’s circa 1985, mullets and all. 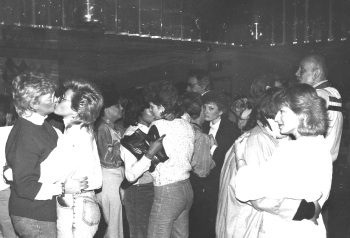 From 1985 to 1987, Ron also ran the Monster Inn at 211 S. Quince, right across the street, where the Blue Lantern restaurant, and later, a string of mob run restaurants had been.  For a brief period after the Monster Inn closed in 1988, 211 S. Quince would also serve as a home to the Gay Community Center. The Bike Stop became soon became host to the Mr. Philadelphia Leather contest, see photo, below, and in 1994 sponsored the first Mr. Philadelphia Deaf Leather contest. 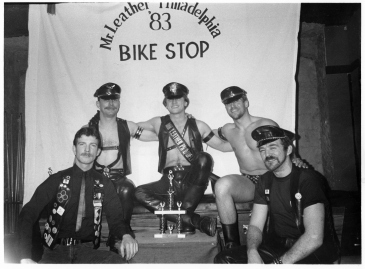 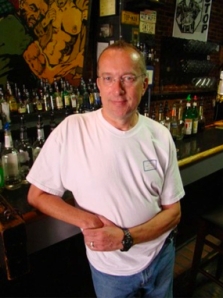 In 1987, Ron hired Jim Madden, left, to work at the Monster Inn across the street. In 1997 Ron sold the Bike Stop to Jim, who ran it until 2009. (There are many instances in Philly’s Gayborhood history of businesses being passed on from an owner to an employee when the employer retired).

Meanwhile, the Cell Block and the Loft  had closed in the ’80s, the 247 closed in 1996 and the Post became Stir Lounge, leaving the Bike Stop as the only real leather bar in Philadelphia. The Stop continued to host the Keystone Boys of Leather, the Philadelphians and the Liberty Bears. 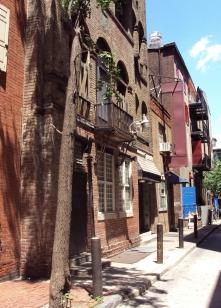 Today, the vinyl siding and the neon sign are gone from the façade, but the painted brown ghost of the Dave Shore’s sign still remains at 202 S. Quince, next door. Only a small sign on the door at 204 S. Quince identifies the location of the Bike Stop and its hours of operation. The present owners of the bar are Robert and Carmella Porter who are happy to carry on the long Bike Stop tradition.

This year, 2012, the Bike Stop celebrates its 30th anniversary. I was given a wonderful tour of the building by bartender/bar manager/historian Mike Gaines. Recent interior renovations have revealed some of the plaster medallions, ceilings and some brickwork arches from 1916. Whether you’re gay or straght, it’s worth a visit just to see them!

Most of the images I’ve used here are either from my own collection or  from the amazing collections of the John J. Wilcox Jr. LGBT Archives at the William Way Community Center. Email archives@waygay.org to schedule a visit there.

The beautiful tile work scattered around the Club was done by the Enfield Pottery and Tile Works just north of the city. What other city  but Philadelphia would have an arts-and-crafts leather bar?